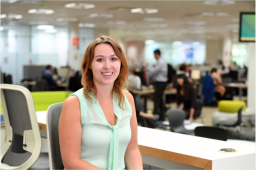 IT needs women to bring a different skill set to teams, to bring new ideas and opinions, and to be equal in all things ‘nerdy’.

I knew going into a IT degree that I would be in the minority, yet I didn’t realise that in nearly every group project I would be the only girl out of six, or sitting in lectures I would be one of ten girls out of a hundred guys.

Within my industrial placement year, I worked at a great company which has won awards for gender equality and I never was made to feel vulnerable or inferior, yet I was still aware that I would be working with majority of men.

This isn’t the fault of the university or companies, there just simply isn’t enough girls interested in going into the technology sector and that stems from little engagement from an early age. This isn’t a glamorous job that at an early age you are taught to aspire to, yet it is so important to everybody’s future that it should be.

My goal is to promote IT and aim to be a Women in STEM role model.

2 thoughts on “Why IT Needs Women”